You have often see me mentioning lymphatic system but as Mark pointed out, I have never explained what it really is. 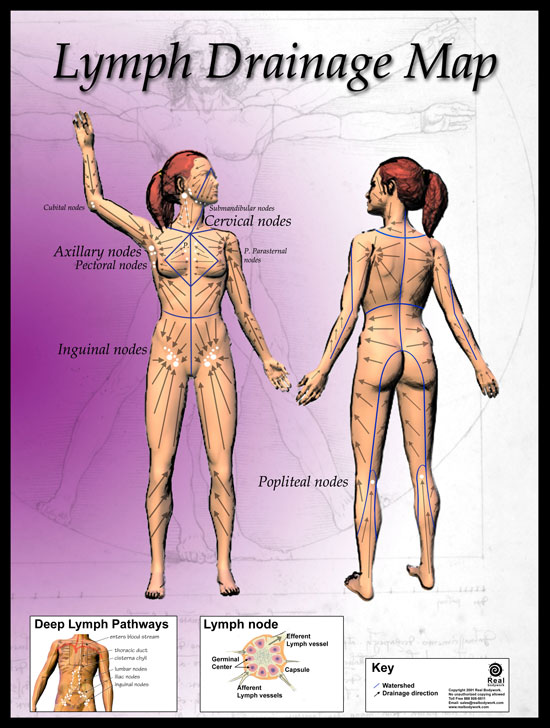 So in this blog I will put more light on this important liquid and its circulation.

Lymph is a blood stripped of erythrocyte (red blood cells). Why would body do this?

There are places in the body where the blood vessels are so tiny that larger blood particles cannot pass through. Those vessels are called capillaries. They are especially plentiful in epithelial tissues and this means on the last layer of skin, mucosa tissue and membranes. You have noticed how the blood vessels branch out and further away from the heart they are, thinner they become. The final branches are lymphatic. Another name for lymph is blood plasma.

If you scrape your hand on rough surface what will come out of the damaged skin is a yellow liquid. This is plasma or lymph.

Since larger particles cannot pass through capillaries, lymph is cleaner than blood when it reaches its destination. This is why organs supplied with this liquid are more protected and cells being supplied by it live longer. This is especially noticeable on bone cells as they are almost entirely depended on lymphatic liquid. This is why I was surprised when I read of the “startling new discovery” that brain has elaborate lymphatic system as separate vital circulation. To me this was obvious since my university days when I learned how the brain is especially protected and guarded from toxins, so much that its blood does not mix directly with the rest of the blood in the body. Instead it is filtered through meninges, a membrane that surrounds the brain.

Since lymph reaches the farthest points on the body, in some organs it may be exposed to toxic elements that have entered the tissue from the other side. This is especially common in the skin and mucous tissues. Skin absorbs whatever you put on it and since the first layer of the skin looking at it from the outside of the body is the epithelium, it will have direct contact with lymph.

Whenever something enters our blood, it has to be firs examined by our defence system. In our digestive system, all absorbed elements are directed first into a liver for evaluation. But there are elements that were absorbed through the lymphatic system which does not flow into the liver. Lymph has its own flow system called lymphatic circulation. So as lymph is leaving the epithelial tissue it cannot be integrated directly back into the blood as it may have toxic elements. So lymphatic vessels are formed and get larger as they approach the heart. Finally the lymph will enter the blood circulation merging into Aorta whose suction will pull lymph back into the blood circulation.

As I have mentioned that returning lymph may contain toxic elements it has encountered in the epithelium. This is why wherever they are merging points where lymph vessels merge together, there will be miniature cleansing stations positioned there to check for unwanted intruder and to neutralize it. So whenever you have swollen and painful lymphatic nodule your lymph has brought an intruder that is now being attacked by your immune system within the lymphatic node.

Often we are not in a position to exercise or even move because we do not feel well or there is some other reason that keeps us still. This dramatically slows lymphatic flow. There is no problem if lymph is clean but if it has intruder,  now  faster circulation is required. Also if we are still for long time, toxic elements will accumulate within lymphatic system and they create toxicity. Lymphatic circulation has to improve so to put lymph into motion heart starts beating faster. This speeds up the blood circulation and improves lymphatic suction and circulation. Increased blood rhythm without “apparent” cause we call tachycardia and we have toxic medication to slow the heart down again. We are so ignorant. Instead of helping the body we are trained to suppress the natural reactions of the body to satisfy patients fear of sudden increase of the hear rhythm.

Every time we artificially slow down the blood circulation we are creating stagnation. Stagnation is one of the main causes of developing disease.

I always point to the fact that our body never does anything to harm itself. Every action of our body has a reason behind it and it is geared to help the body and not to do the contrary. We are told the wrong medicine in medical misinformation centres we call medical universities. No wonder doctors do more harm than good.

Alternative medicine recognizes the importance of good lymphatic flow so attention is given to it and to lymphatic cleansing.

Massages are recommended and all kinds of natural remedies of which most do the suppressive action similar to what doctors do. The reason behind this is the same faulty knowledge.

So how to cleanse the lymphatic system and the lymph itself?

First we have to cleanse the blood so that it can flow faster without friction. This increases the suction of the lymph. As lymph merges with the blood it will be cleansed by the blood cleansing organs of which I have spoken earlier or in my book. Since toxic lymph will prevent cellular hydration of the cells it is supplying, those cells will become dehydrated and toxic. This will trigger inflammation. Toxic cleanses will not help cellular hydration. In fact they will further stay in the way of cellular water absorption so it is absolutely necessary to hydrate with water and sea salt because lymph is being cleansed with the blood and not separately. Faster blood circulation will help flush lymphatic system so exercising and physical activity s crucial. Massages will help but nothing is as important as good blood circulation when we are talking about the lymph itself.

Lymphatic system of the skin can be flushed by soaking the body in a warm water in which you add sea salt. Since water and salt with all the other minerals will be absorbed into the skin, it will be transported through the lymphatic system into the blood flushing it on the way. Sea water has all the minerals we find in the blood plasma (lymph) so flushing the system with sea water is the ultimate thing you can do for your lymphatic system your blood and your body in general.

I cannot stress enough how important it is to have sea salt present in the water we drink. Salinity is essential for good conductivity and we cannot have good electromagnetic potential in the body without proper salinity. As a strong magnetic field improves conductivity and repels blood and lymph particles, in this way it also speeds up the circulation. This means grounding is very important as well. Walk barefoot as often as you can especially when you are in the nature.

Self Healer Protocol is the best cleansing protocol there is and because of it , body not only heals itself but rejuvenates as well.